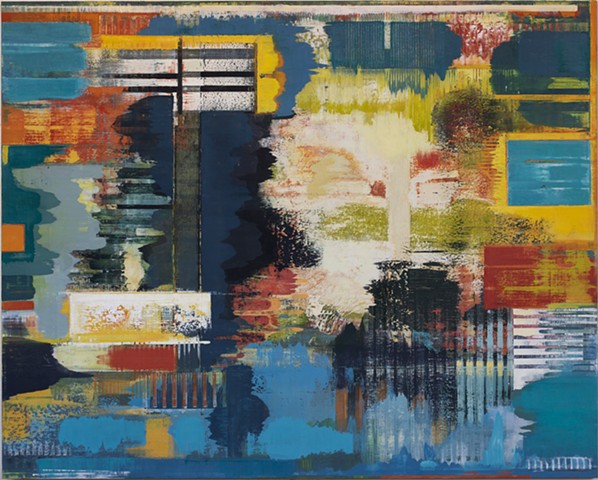 Thinking about my approach to painting the phenomenon of weather as an analogy comes to mind. The focal point in a painting is like the eye of a storm. We speak of jet streams and fronts and the possibility for change is ever present with the interaction of warm and cold. It can be overcast or clear, calm or turbulent.

Change and transformation is the corner stone of my practice. Oil paint defies intent and demands that its inherent qualities be allowed to speak. Its visceral nature enables a push and pull of imagery. Throughout this process I ask that my paintings contain a sense of atmosphere, light and space and that the end result be colorful, rhythmic, and tactile. I think in terms of counterpointing different systems on top of each other and melding them into patterns. As a result, my paintings are multilayered and spatially complex. The layering comes out of an extended process of adding and subtracting in response to what’s happening on the canvas. It's about making decisions and changes, all with a mind to arrive at an image that evokes a sense of place and memory. The finished painting stands as evidence of a process of struggle, contemplation and discovery.

My work could be described as painterly abstraction at first glance. But a closer look reveals an underlying vocabulary grounded in visual experience and observation. It is a vocabulary of growth and decay, mountains and architecture, waves and bridges, gesture and geometry, clouds and skyscrapers all from the perspective of memory and emotion. Born in the White Mountains of New Hampshire, Chris Walsh received a BFA in printmaking from the University of New Hampshire in 1978 and graduated from Pratt Institute in 1983 with an MFA in Painting. He lived and exhibited in the New York City area for 27 years before moving to Toronto with his wife and son in 2008. He has exhibited in solo and group shows in New York, Toronto, and New Hampshire and his art is included in private and public collections, including PepsiCo, the Port Authority of New York/New Jersey, and the Yale University Art Gallery.